Nathanael Batchelor works as both a freelance comic and concept artist along with voice acting and many other talents including sculpting and special effects/make-up. Voices he loves to imitate include Kermit the Frog, The Joker (both Hamill and Ledger versions) and Megatron (G1 and Transformers Prime versions). He is currently working on an original comic series named Retr0. Nathanael has also cosplayed and acted as The 11th Doctor for New Dimension Comics for various events. He’s excited to bring new content to the upcoming Comics & Collectibles Shows and thankful for the opportunities that NDC has provided him. D.J. and Ally make up the creative team behind the upcoming “God Child” graphic novel from Caliber Comics. D.J. is a small press veteran who began his comic career self publishing mini comics and graphic novels in the Pittsburgh area before moving on to create Hero By Night and many other independent comics. Since teaming up, Coffman & Monroe have not only been working on God Child together but also spend the rest of their free time creating side projects and loving sequential art Vito Delsante is a comic book writer/graphic novelist. He’s written for DC Comics, Marvel Comics, Image Comics, AdHouse Books, and Simon & Schuster, among others and his stories have been reprinted in other countries.

Vito currently makes his comic book home at Action Lab Entertainment where he has penned the smash hit “Stray”. His writing has received praise from everyone including the legend himself Stan Lee. Shadow Fox is a native Pittsburgh cosplayer that loves to create! She prides herself on quality work and spanning different genres, from video games and TV shows to comics and original designs. She loves supporting others that share this wonderful hobby! You can check out her fan page at www.facebook.com/ShadowFoxCosplay Garrett Free is a comic book writer from Pittsburgh, PA. He learned from a young age by attending art school at the Carnegie Museum of Art in Pittsburgh, PA. After reading the Watchmen, Garrett began pursuing writing comic books as a new creative output. He finds that his biggest influences in his writing come from his own past experiences and music, but he also draws a lot of influence from old movies. He has been writing his Arcadian Knights series since 2012. www.facebook.com/ArcadianKnightsComic Easily the most prolific staff member of Action Lab, Shawn (and wife Stephanie) have been carving out their niche with Angry Gnome Comics for years, producing books like Palm Reader, Victor Season, and the critically acclaimed anthology, Short Stack, an excerpt of which was featured in Heavy Metal magazine. Shawn also spearheaded the Greenbrook Project, challenging five indie publishers to take the same basic plot and character list and to create their own unique storyline.

As Editor in Chief of Action Lab, Shawn lends his eagle eye to all Action Lab books from conception to the final product. On top of his duties as EIC, Shawn is also the writer of Action Lab’s first comic book series, Fracture and the horror filled one-shot Snowed In. Gregory Leonard
Hello, my name is Gregory Leonard, friends call me eor. I’m a pencil artist from Pittsburgh, Pa. I am 30 years old and I’ve only been drawing a short time but I’m looking to make an impact with my work. I usually draw portraits, comic characters, and pin-ups. I’m extremely excited for the chance to show off my work and I hope you will stop by and say hello.
If you would like to see some of my work please check out my Facebook page
https://www.facebook.com/EOrsArt
Website
Http://pencil-art.org/eor John Martin creates spectacular original digital paintings in full detail from the industry’s biggest comic heroes and villains to classic science fiction icons. Come and see his already established fan favorites such as Deadpool, Batman, Star Trek, Doctor Who and many more. There will be several new paintings including his much anticipated Star Wars Collection. Commissions will be accepted before, during and after the show. Please visit his website www.risenlion.com to preview his work and like Risen Lion on Facebook to stay informed of new paintings and show appearances. Hello, I’m Yoko from Pittsburgh, Pa. I’m 22 years old and I’m new to the world of cosplay. I finished my first cosplay in August 2014 as Lady Loki and I’ve been addicted ever since. I managed to complete four cosplays before the year was up and I’m hoping to bring even more to the table this year. I can’t wait to see where the future of cosplay takes me. I’m confident in my everyday life but being in cosplay just gives me a power up. I hope to help others feel the same way and I’m always here for any advice or help in the cosplay community. Check out Tee Fizz and their awesome selection at http://www.teefizz.com 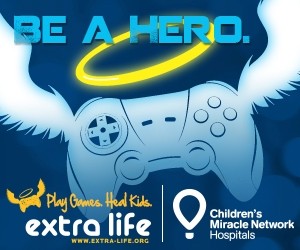 Extra Life is a charity guild that started in 2008 and raises money for Children’s Miracle Network. They do events like 24 hour game-a-thons and others to help get sponsers and raise money. For more information go to www.extra-life.org for more information about helping out! Z-play: Cosplay for the next generation: Our goal is to inspire the next generation of youth to Cosplay. Using imagination and hard work, you can create and become your favorite characters!
Gaming Events!
Magic the Gathering Booster Draft – 6pm, $20 Entry, Awesome prizes.
Heroclix! – 5pm
All Gaming events will have part of the entry fee go to the Music Therapy Department at Pittsburgh Children’s Hospital.
Comic Drive!
Bring your old comics and Graphic Novels and donate them to local Libraries!

Interested in being a guest or vendor? Email us here to get all the info!