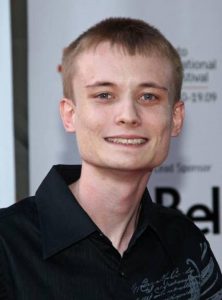 Jeremy Ambler is a Screen Actors Guild Eligible Actor & Featured Movie Extra who is well known for his Role as a Featured “Highway Walker” in AMC’s The Walking Dead Season 2 Episode 1 “What Lies Ahead” and in Episode 13 “Beside The Dying Fire”.

He has also been featured on a variety of Walking Dead Merchandise which includes T-Shirts, Hats, Trading Cards, Board Games to just name a few.

Other horror roles he has taken on have been in movies like “The Crazies,” “Dead End,” and the recent 2014 remake of “The Town That Dreaded Sundown” that also stars Veronica Cartwright (Daniel Boone, Aliens, The Birds). He has also been featured in other regional horrors like Troma’s “Pro Wrestlers Vs. Zombies,” “Night of the Living Dead Genesis”.

Ambler has also cut his teeth on some other Hollywood feature films such as the James Franco movie “Child of God,” “Killing Lincoln,” HBO’s “John Adams,” “The Road,” “Adventureland,” “American Reunion,” “Harold and Kumar Escape from Guantanomo Bay,” “Evan Almighty,” “Toxic Tutu,” “Rednecks,” and “The Dukes of Hazzard”.