Here is the Official Press release:

“Every major city has a comicon and I want to bring that excitement to Pittsburgh”, says McDevitt.  “In my 29 years in the comic business, I’ve been fortunate enough to work with almost all of the regional talent at one time or another. I can’t wait to bring them all together for one spectacular occasion.”

McDevitt wants to offer special thanks to artist DJ Coffman (https://www.facebook.com/djcoffmanart/photos_stream)  for the spectacular design of the conventions logo.  “I knew DJ would do a great job when tasked with this important element of our new undertaking and his design blew me away.”

The event will be held at the Century 3 Mall. “We will host this convention in a great space that is larger than most event venues in the city”, says McDevitt.

Details will take shape in the coming months on featured guests, vending, programing, tickets and special events.  “All the pieces are coming together quickly, but I wanted to get the plan announced as soon as possible a sort of “save the date” notice.”, says McDevitt.  “No one will want to miss this!”

Support from the veterans of the comic book convention community include these endorsements:

“I have fond memories of comic conventions in Pittsburgh.  It’s been quite a while since I’ve been excited to attend one there.  I know Todd is a comic book guy and that he plans to host a COMIC BOOK centered show.  I applaud the plan and will aid and support him in every way I can.  Look for HEROES in Pittsburgh soon!”

“Pittsburgh has a great history for comic collectors and deserves a large convention. Todd has been a good friend for decades and I’m sure he will be a great promoter for a convention just as he has been for his retail stores. I’ll be there for sure with all my best efforts to help it succeed.”   -Marc Nathan, Promoter of Baltimore Comicon

“With five successful comic shops in the Pittsburgh area and several one day comic shows Todd McDevitt is poised to fill the void left by the demise of the Pittsburgh Comic Convention.”  -Bill Thade, Promoter if the Gem City Comicon Due to circumstances beyond our control this event is canceled and will be rescheduled soon! Sorry for the inconvenience!

Vincent Paul Mirabella II is an artist, filmmaker, photographer and author. This summer, he released his 1st book, The Tangled Web Of Betrayal, book 1 of The Trans-Metronome-Device Series. The sci-fi/fantasy adventure includes illustrations by the author himself and a film is in the making. 8 books are planned for this series and 2 spin offs are being considered. Book 2 is already rough drafted and being fine tuned.

IF YOU WOULD LIKE TO BE ON THE MIRABELLA PRODUCTION TEAM OR TRY OUT FOR A PART IN THE 1ST FILM CONTACT MIRABELLA ARTS DIRECTLY AT (570) 419-6113  New Castle, Pennsylvania is their main headquarters and they are always scouting talent. So if Vincent or one of his associates gives you a card and inquires of your ability or desire to act or work behind the scenes on the production team…it’s for real…don’t procrastinate…call. Stop dreaming and start living the dream.

Join us in celebrating our Ellwood City location’s anniversary!

We will be giving away a FREE long box stuffed with comics every hour!  Stop by for your chance to win one! 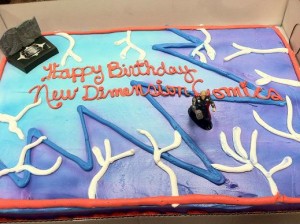 Zenescope Entertainment will be in store for the Van Helsing vs. Dracula #1 Launch Weds, Aug 19!

Customers who purchases the #1 issue in the store will receive:

– Entry into a raffle to win special prizes

– Special promotional merchandise (limited to the first 20 customers per location).

Come and check out this awesome new title.

(W) Patrick Shand (A) Andrea Meloni (CA) Richard Ortiz
LAUNCH POINT
Last year, Liesel Van Helsing was attacked by an evil from her father’s past… but she survived, and has moved on with her life. Besides becoming the name that vampires in the tri-state area fear, she’s also found love – in, admittedly, the strangest places. However, when old friends come calling on her for help, she will find herself pulled into a final conflict with the deadliest vampire of all time…