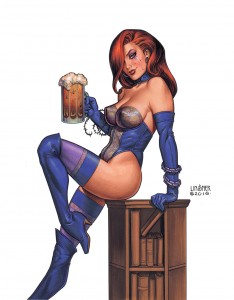 3 Rivers Comicon, hosted by New Dimension Comics, has commissioned a custom beer by Helltown Brewing featuring original bottle label art by Dawn artist Joe Linsner and will host a bottle release party on May 21, 2016.
“We have a lot to celebrate in 2016.”, says Todd McDevitt who is owner of New Dimension Comics and promoter of 3 Rivers Comicon.  “It’s our 1st annual comic convention plus the 30th anniversary of New Dimension Comics.  To make our landmarks as festive as possible, I wanted to do a special beer.”
The exclusive beer will be brewed by Helltown Brewing, based in Mt. Pleasant, PA.  It will be a Russian Imperial Stout with a portion aged on bourbon and oak and blended into the batch.  This beer will only be available exclusively at 3 Rivers Comicon and New Dimension Comics events.  “I wanted something we can age and enjoy at future comic conventions for years to come”, says McDevitt.  “I plan to do this every year.”
2 events are slated showcasing this beer, named Dark Dawn Stout to honor the Joe Linsner signature character Dawn.  The label features her image.  A preview tasting will be held April 19, 7:00, at House of 1000 Beers in New Kensington, PA with comic prizes and other surprises yet to be determined.  May 21st at 7:00 is the bottle release party at 3 Rivers Comicon in West Mifflin.  Artist Joe Linsner will attending to autograph bottles.  Tickets at $40 include weekend admission to 3 Rivers Comicon, a t-shirt, food, and free samples of the beer including a free bottle for fans to take home.  Tickets are on sale now at http://3riverscomicon.com/tickets Prerelease for the newest Magic The Gathering set! Check your local NDC for times and event details!