Limited exclusives will be available from Marvel, DC, Image, Dark Horse, and so many more! (While supplies last!) Marvin Wynn
Marvin Wynn is a resident of Pittsburgh PA, and begun crafting the story of The Edge in 1992. The story went through multiple iterations and story changes before starting work with Mark V. It was then that the story settled into what it is today. Marvin is an avid gamer siting Uncharted as his favorite video game series. Our owner, Todd McDevitt, partners with Shubrew in Zelienople, Pa and Action Lab Entertainment to bring you BLADE’S BLOODY BARLEYWINE!

Available on Local Comic Shop Day Nov. 19. The comic book and the bloody brew will be available at two New Dimension Comics events: Nov. 19 noon to 3 p.m. at New Dimensions’ store in Century III Mall, West Mifflin, and from 5 to 8 p.m. at the Pittsburgh Mills store in Tarentum.

Fans of horror films or craft beers will be able to drink this limited release brew on Oct. 25 at the ShuBrew Brewery in Zelienople during its Halloween party. It will continue to be on sale at the brewery after the event.

As for the comic book to peruse while imbibing, an exclusive Puppet Master variant cover comic book was designed with special art also included on the beer label. Only 500 copies have been produced. Puppet Master comic writer Shawn Gabborin and label artist Chad Cicconi will be there to sign autographs alongside representatives of Action Lab that produced the variant cover.

Check out this awesome article for more details! 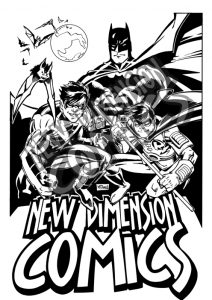 Don’t get stuck standing in line! Get your tickets from Oct 1 thru Dec 31, 2016 to get last years pricing!

Please note you will save on service fees when you buy your tickets at your local New Dimension Comics!

Get your tickets here www.3riverscomicon.com

Major guest announcements coming soon! You will not want to miss 3RC in 2017, we promise!